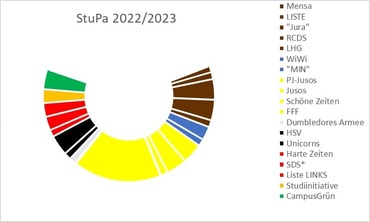 Dear fellow students, Until January 24, 2022, the postal election for the Academic Senate (AS) will take place (the letters need to arrive at the election office at Mittelweg 177 by 2 p.m.). As CampusGrün, we are running as List 1 in order to campaign as student representatives in this highest elected body for a university that we want to turn from head to toe.

This is easier said than done: the Academic Senate, with its absolute majority of professors, is not a democratic body. As a counter-reaction to the student movement for democratic universities, the dominance of the profs in all self-governing bodies of this university was established by the courts in 1973. Due to the absolute majority, decisions in the Academic Senate are determined less by argumentative discussions than by professors arguing informally among themselves. For this reason, professorships are a structural problem. We think: Science is not made by professors anyway but by the precarious academic mid-level staff, exploited doctoral students, student employees, as well as unpaid master and bachelor students - in the administrative language, assistants are called "material resources" and students are called "public traffic". Accordingly, we want to turn the structure of this university upside down with you!

What is happening/has happened in the current legislature:

Further de-democratization tendencies in an already rather undemocratic senate.

First of all, we have to inform you about a worrying tendency that we have experienced this legislature in the AS and against which we have also repeatedly defended ourselves. Both the professors and the presidium, who have a common interest in the continuation of their monopoly of power within the university, repeatedly interpreted the Hamburg University Law (HmbHG) in a contentious way this year in order to not allow unwelcome motions. For example, some of the professors wanted to reject a motion to participate in the anti-fascist commemorative reading "Book Burning - Never Again!" as inadmissible (which did not succeed due to student protest, but was already very cynical, because the people who burned books back in 1933 were mainly members of the University of Hamburg). The professors also prevented by a narrow majority that all student groups in the AS can participate in the committee work as (deputy) members. This means that on non-public agenda items, certain political groups simply do not have access to information. We want to stand up against this and continue to fight for a democratization of the university as a fundamental opposition. Abolish the professorships - now more than ever!

A new president for the UHH

As CampusGrün, we were involved in the AS in the process of finding the new president. The procedure was flawed due to a restrictive interpretation of the university law. Only one candidate was publicly presented to the AS and proposed for "election". We have been able to place our criticism of this in several articles (including here). The new president will also take over the leadership of the AS from the next legislature. We are curious, but do not expect anything. His previous (university) public appearance was obviously designed to please everyone. His little-concrete contents and especially his description of the university management as "participative leadership" do not give us much good hope.

SARS-CoV-2 has also dominated this legislature in the Academic Senate. Over and over again, there have been controversies over the exact design of measures. Again, the non-involvement of the AS in decisions has been central, as these are made in a by a Corona Crisis body that is neither elected nor public. We think the 2G concept is legitimate in the current situation, taking into account that all students have received an offer of vaccination, but we criticize the implementation: a large part of the rooms are still not equipped for hybrid formats. In-classroom teaching teaching is unnecessarily complicated by the administrative burden on lecturers, and the presidium instead feigns the ability to act by, for example, removing chairs from seminar rooms so that really no one violates the spacing rule. Other problems of the pandemic, such as our social conditions, continue to be ignored. Since the beginning of the pandemic, we have been fighting for solidarity semesters, because students in particular should not have to suffer the social and study-related consequences.
In yesterday's AS meeting, numbers and experiences from psychological advisory service were presented, which once again show us that the proportion of fellow students with mental illnesses such as depression is probably increasing significantly. While lecturers complain about black boxes in the zoom call, we are aware that pressure to perform and loneliness are the phenomena that actually need to be fought. Acutely, what is needed is a larger and better funded range of psychological advisory services, presence rooms where students can network and organize with each other, and less market-shaped studies!

This year, the AS recommended that the Presidential Board take measures to achieve climate neutrality at the university (as is mandatory for all parts of the public administration in Hamburg) by 2030. The presidium then appointed a climate officer, and a climate plan is also to be developed. This recommendation comes much too late and the consequences are far from sufficient. Thus, the measures can contribute at best to the greenwashing of the university. What is needed is more resources and staff, as well as a democratic structure "from below", and it is needed now!

Other disputes also have to do with effects of the pandemic: The Hamburg Senate has effectively cut funding for the university. The reason given was lower tax revenues. The Senate keeps denying these cuts, and protest against them under pandemic conditions has only been organized by us students in the #StopTheCuts alliance. Unfortunately without success. The first effects are the elimination of the University College and the cancellation of funds for doctoral scholarships (and that in this situation of social precarity). We continue to fight for funding of the university and better working conditions, among other things through our cooperation with TVStud for a student collective work agreement!

Our projects outside the Academic Senate are listed in our list representation.

Our principles, the entire election program and current publications can be found on the rest of this Homepage.

General information about the election are here.

Dates of the Academic Senate as well as protocols and resolutions can be found here.

We hope to meet again on campus and in events as soon as possible!